Adelaide has her own kitchen! 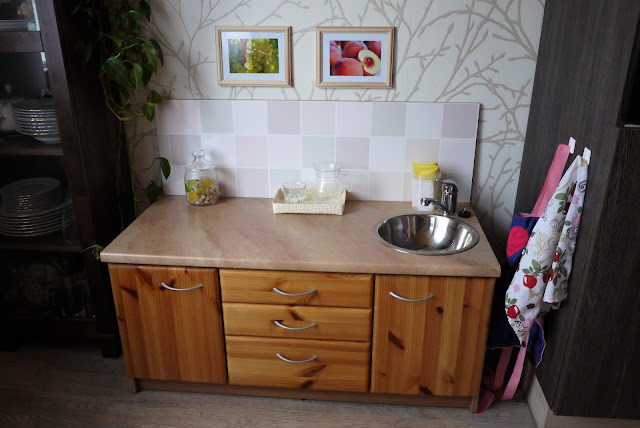 It's ready and we are so proud! :) Isn't it beautiful?

We wanted a kitchen for her. It is not a "play kitchen", it is a real (Montessori) kitchen. This was the first decision to make. (Actually this was one of the first things I was wondering about in my blog - what is better, a play kitchen or a real kitchen?) Of course, children like role and pretend play, some more and some less, Adelaide definitely likes to play with her dolls, the dolls are doing everything - eating, sleeping.. However, as it is believed by Montessori, more than pretending children actually enjoy the real thing! The real life, they want to be able to do it for themselves, they want to participate and be capable. That includes helping in the kitchen.
Adelaide has helped me to unload the dishwasher probably for about a year (she can help to load it too now), and lately she was showing very clearly, that she does recognize, which are her things, and that assured me, that she would love to have her items separately and to be able to use them independently. For example - when taking a small plate out from the dishwasher, she says: Porridge plate! Your porridge plate! (She refers to herself as you. Putras šķīvis! Tavs putras šķīvis! in Latvian), and often she even was taking her plates and the small spoons and putting them on the table, where she eats. So now she has her own cabinet and can place all of her dishes there. 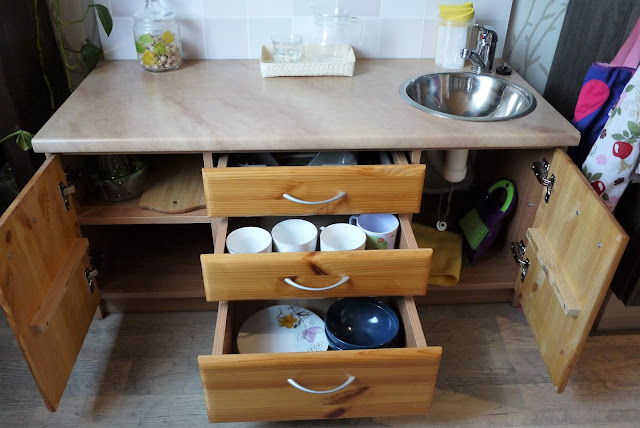 At first we wanted to get her the Ikea kitchen. It is a play kitchen, but quite realistic, so often used by Montessori families sort of like a real kitchen (the sink can be filled with water). It's also quite cheap, so we figured, it is cheaper and faster to buy that than to build one ourselves (which, of course, turns out to be true), so we already almost ordered it. 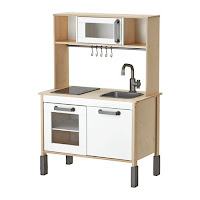 But then I got inspired by one famous Montessori blog - Midwest Montessori also has a real kitchen. And we started talking, where could we place it, and it dawned on us, that we actually have a corner in the kitchen, which could be used more efficiently, so then.. Why not a real kitchen instead? And yes, to my surprise, Mr. Husband was enthusiastic of even connect the sink to plumbing. :D So Adelaide has a sink with running water (and water runs away too). 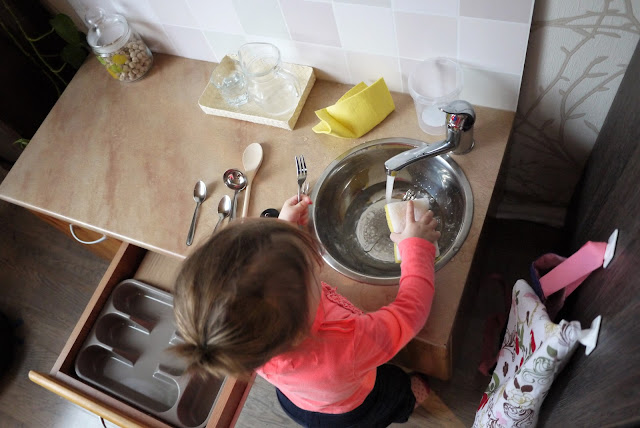 And it doesn't have a stove or any pretend play parts - only real sink, real work surface and real storage compartments for her dishes, silverware, cooking tools and utensils, cleaning tools and we'll see, what more.
When it comes to pretend play kitchen, I don't know if we will sometime make her another tiny play kitchen for that, or actually - when it comes to pretending and imagination, I'm convinced, that it's best, if she creates it herself, instead of us getting her a totally ready and real-looking thing, when it comes to real, that's what this kitchen is for. 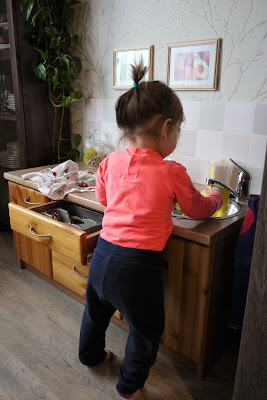 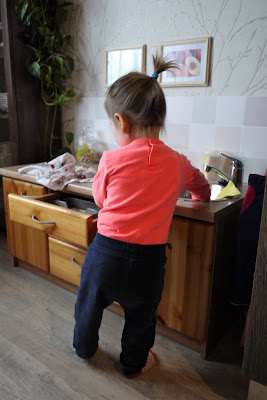 It wasn't so hard to make this at all! Took a weekend and one extra day to finish. We started by purchasing a used TV cabinet, and I think it was meant to be, as we got the perfect one so quickly! It's perfect size (not easy to find a low enough cabinet, TV cabinets or shelves are the best bet), and it even had a top from a kitchen-surface material. We lowered the top part to make it perfect size. (Adelaide liked this immediately as we took it home.)

We planned to put a real sink and tap.. But a problem occurred - turns out, they don't make such tiny kitchen sinks! Unless we wanted it to take up half of the space. So instead we got a metal bowl, and turns out, it's even quite simple to drill a hole in the bottom of a metal bowl and connect it to a drain system. Add a tap, and then the hardest part was to connect it to a working plumbing system, that it would actually work and wouldn't leak.. That took some time and the plumbing was the most expensive part, but it's definitely worth having a working sink! Now we don't have to have a water dispenser, she can get the water herself comfortably for drinking, washing hands or dishes or anything else, and we avoid the mess because of having to empty the sink otherways. Mr. Husband made the water system like this, that water is in a constant (room) temperature (we can regulate it), so she can't burn herself with hot water nor it's too cold. 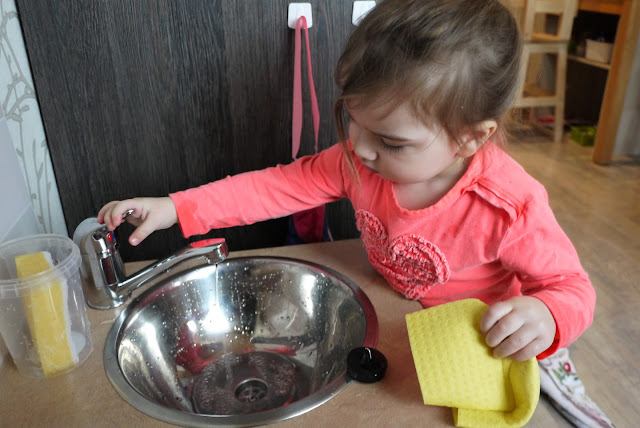 We added a back wall with a water resistant surface (glued on a simple piece of plywood) to protect our wall. 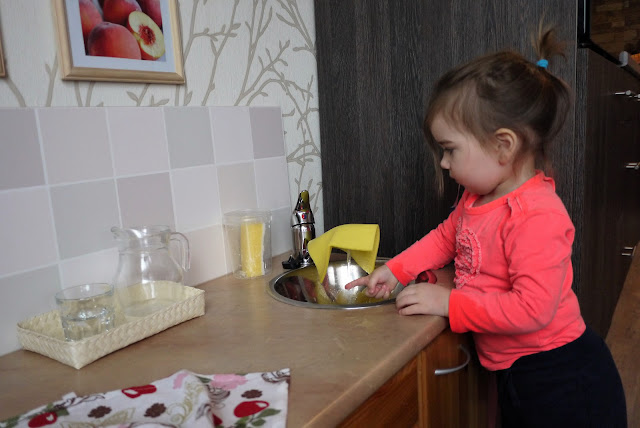 When combining our expenses, the kitchen cost us 98 euros! I was afraid it's going to be more. (Here is a document with all the expenses and links.) 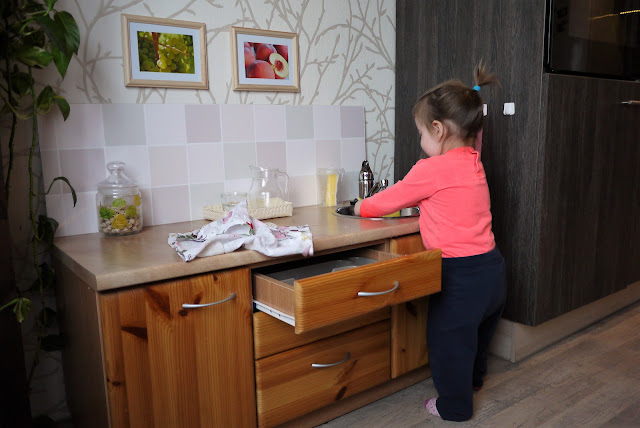 She simply adores her kitchen. Starting from the tap (and she was wondering, before it was connected, why doesn't it work.. Again, real is so much better!), the cabinets.. I guess the size is so appealing to her, she was just opening and closing them, placing things inside, so much enjoying it. And now, when she has her things there, she was spending the morning washing all of her spoons! :) And she was asking me for an extra portion of her morning porridge, bringing her plate and spoon. 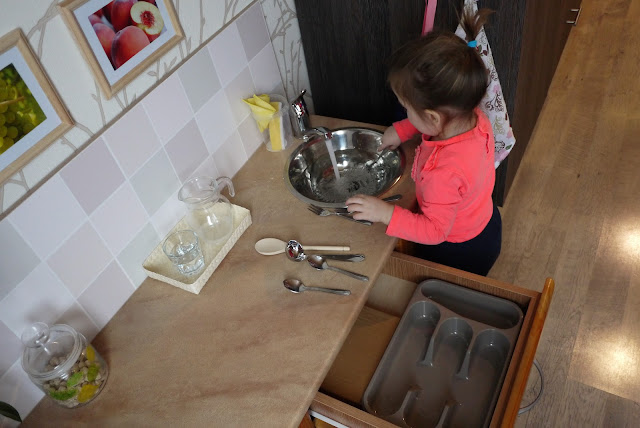 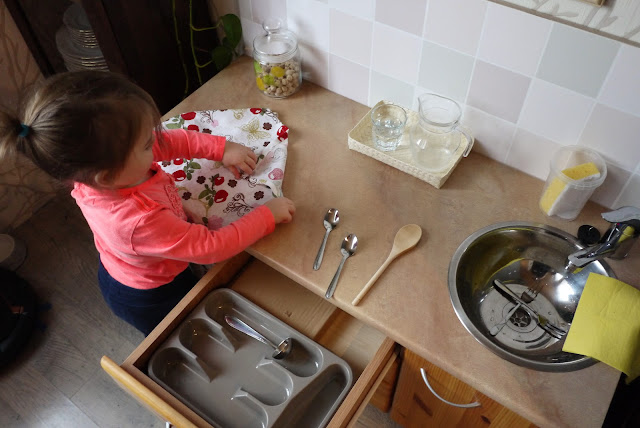 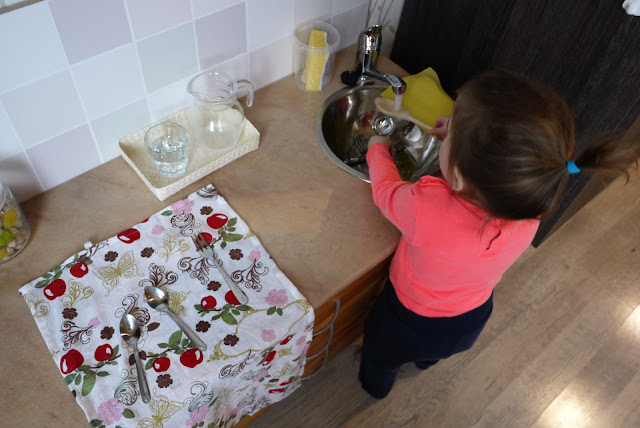 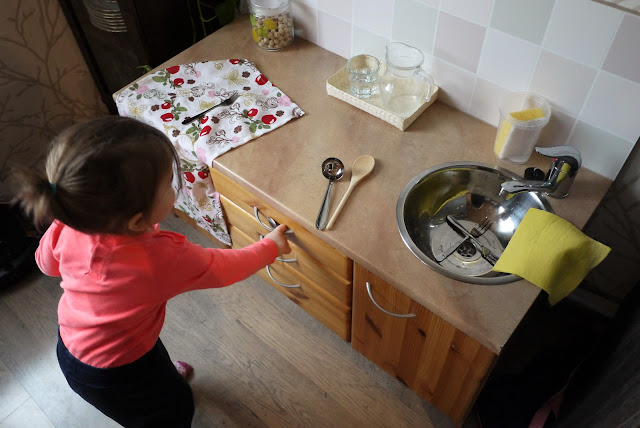 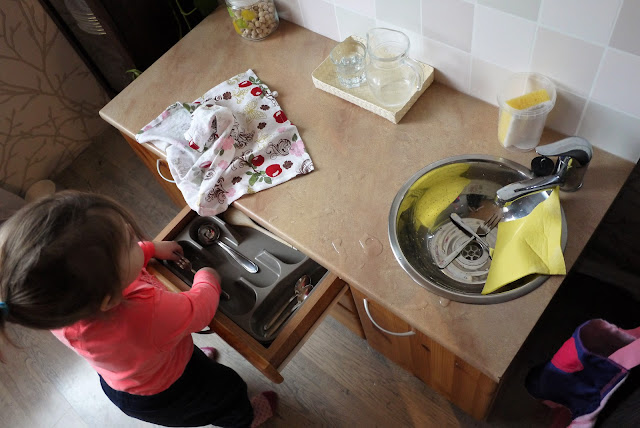 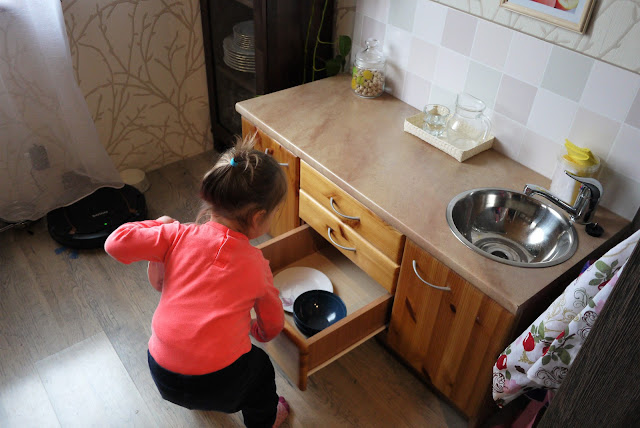 Hopefully we are not going to have too many floods. So far she was using it very nicely. :) 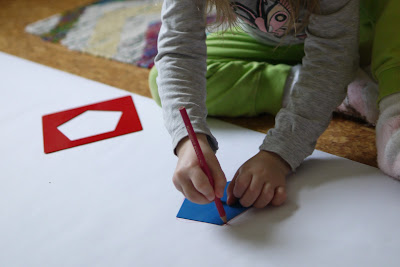 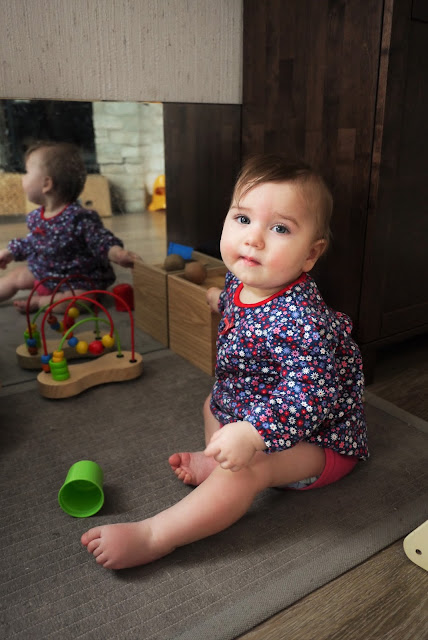 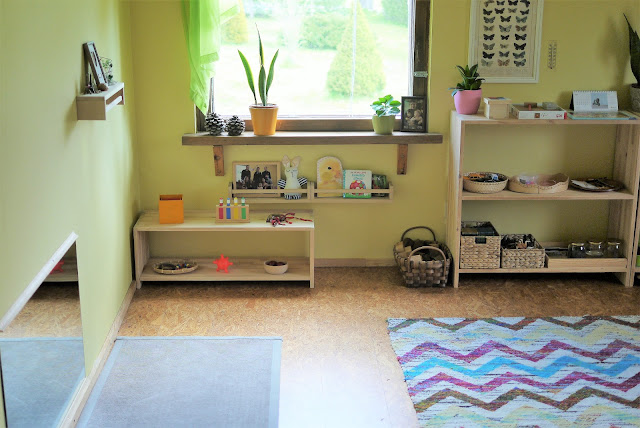 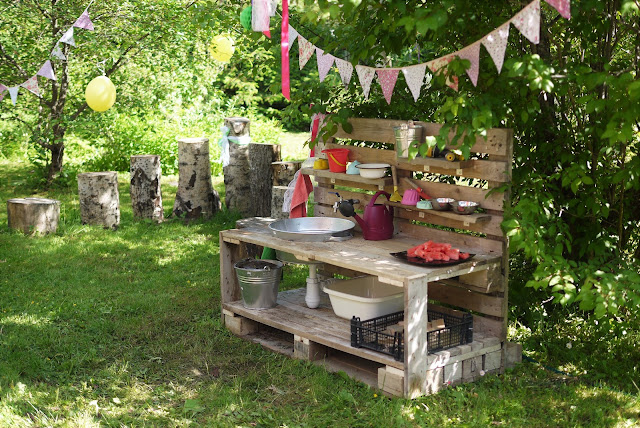 Post a comment
Glad to see you here! This is our journey in life and parenting. Day to day adventures and new experiences, growing up together with our children.

Please do not use any of the content or photos of this blog without permission.